When I received an inquiry from Jarring Effects in May, 2013, I was very excited. My previous music video for Le Peuple de l’Herbe had been completed one year before and I was still looking for an interesting new project to direct.
I listened to “Allaxis” and immediately found it very interesting, the music is dynamic and the quotes are inspirational. I didn’t really remember the movie Dirty Harry, so I watched it the next few days. As these quotes are very present in the music, I wanted to create a music video freely inspired by this great movie. Since these quote are about Harry’s gun, I wanted to give this weapon a center place in the story. In the music, the words from Dirty Harry sound weird and repetitive, nightmary. I definetely knew that this music video would be dramatical and include a gun. I still had to found out what the main character would be.

Once the scenario was accepted by the label and the band (at the first attempt, luckily), the production of the music video started on July, the 15th and should finish for early September. One month and a half is not so long for an independent animation video… The main concept of the story is efficient in the fact that we keep track of the same car. I wanted an efficient character animation, to be good looking, even if it’s time consuming. That’s why the backgrounds would just pass by, almost all the video long, so I could spend more time on the characters.

As soon as the scenario is validated, the first thing I do is the storyboard. I put together quick rough images of each scenes that I want in the video. It’s very important because all the animation process will be based on this document : how many scenes, backgrounds, characters, what the characters do, where the camera is placed, etc… Also, it lets me check if the story can fit the music time. At this time, it’s pretty easy to remove (or add) scenes before going deeper in the creation.

Bob, or Robert Baldwin, would be the main character.

He would spend most of the music video thinking of his past. As in Reservoir Dogs (Quentin Tarantino | 1992), I wanted the story to be based on an unseen previous incident, that we discover later in the story. Bob keeps thinking of what he just did before.

Actually, it is absolutely not interesting to watch someone just thinking, isnt’it ?  That was the point. The main character would be supported by another character that would represent his memories. That would allow a lot of fun for the animation, by switching this character quickly as Bob recalls his buddies, parents, ennemies, love affairs…
A lot of characters appear only for a couple of frames in the video, that took us a while to draw tons of them. (David Decobert helped me a lot creating them, Thanks Buddy!) We spent days only drawing characters and characters…

Some characters actually appear in the video several times, these characters reflect the spirit of Bob. But others are visible only for 1 frame in the whole video. There are some hommages to characters we liked and wanted to include in this crazy patchwork. (not the above ones, of course!) 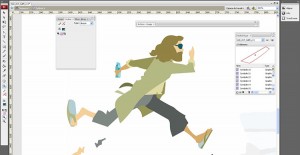 Would you be able to find this Jeff “Dude” Lebowski running ? (Nicely drawn and animated by David Cazeaux)

As the action would take place in a car, I choose a convertible model so we can better see the characters sitting in it. Actually it’s one of my favourite american cars, the Chevrolet 1957 is such a great symbolism of America. Just beautiful and huge. Plus, it lets place for the crazy character to move around the seats. It’s drawn in 2D for almost all the scenes of the video, except for the first and the final one, where it has been modelized in 3D. (Because the camera turns around it, and 2D animators are sometime (always?) so lazy…)

I had the chance to have the visit of my best friend KURT 602 during the making of this music video. Kurt is an illustrator passionated by cars (particularly the famous french Citroën 2CV). He helped me a lot by designing all the vehicles in the clip (And yes, there’s even a 2CV in the video, his own car ;).

The making of the character’s animation can be time consuming. It requires to work step by step, from rough to clean. From jerky to steady.
I had the chance to be helped by friends of mine for the animation. David Cazeaux and Marion Delannoy took in charge the greatest scene of the video, when the crazy character transforms into a flying monster. Also, David Decobert and Jean-Philippe ‘Bubba’ Florin animated a few scenes in the first part of the video. Thanks you all guys !

The next step after the storyboard is the animatic (a rough animated version of the video) only with the main poses of the characters. It helps to visualize the rythm, the speed of each movement, and to adjust it.

After that, you’ve just to draw some inbetween frames, make overlaps and add details. Finally, clean it and add colors. Done !

Ok, it’s maybe not that simple to imagine, that’s why  I made this quick video to watch the process from scratch to final render of one scene:

Jeremy “Jebedaï” Couturier is a very talented friend of mine. He already designed all these weird animals for our first Le Peuple de l’Herbe music video. I wanted to tell what happened before the start of the music video in a different graphic style. I was very happy that he found some time to draw these flashbacks even if he was very busy finishing his own Comic. 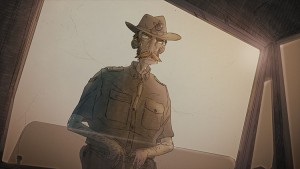 It’s easy to put together all the scenes to make a music video. But, if you don’t want to forget one scene in the process, or to spend 6 months doing it, you better have to be organized. Very organized. 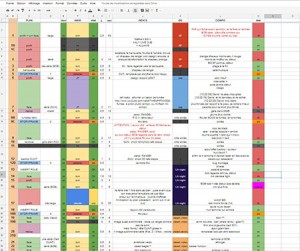 This is probably the most important tool for any independent animation director : Spreadshit !^^
With this document, I know at any time how many scenes are ready to start, in progress or done. I can instantly watch what happens on every scene. Check the length, the complexity, the number of characters… It helps a lot because when your client gives you a deadline, as a professional, you better have to respect it. Without a document like this, it’s almost impossible to visualize the whole work remaining.

I hope you’ve found some interesting things in this page. If not, feel free to let me know (Don’t be too rude, it’s my first attempt writing such a “making-of”…)

This article has 2 comments